This week’s oldie-but-goodie comes from the front porch where last summer a spider took residence. I got creative with the lighting here, using a full three strobes. I controlled the strobes with Nikon’s CLS (Creative Lighting System) using the built-in flash as the controller.

The main light was a Nikon SB-900 with 1/4 CTO gel (the one that is supplied with the flash) and a Nikon SB-700 and Metz 48 AF-1 were both used as rim lights, un-gelled. I programmed the CLS settings in the camera as follows:

Happily I also had a Mitzy to stand behind the web!

And here’s a bonus close up.

Here’s a photo from a camping trip at Killbear Provincial Park that I took with my friend Michelle back in 2009.  For a couple of years my absolute favourite lens was the Pentax DA* 50-135mm f/2.8 and this photo shows exactly why. The bokeh, colour, contrast, sharpness were all perfect. Just perfect. On a DX body it gave a 75-200mm field of view.  This lens was my big reward for getting a job after finishing my masters and I used if for thousands of photos. 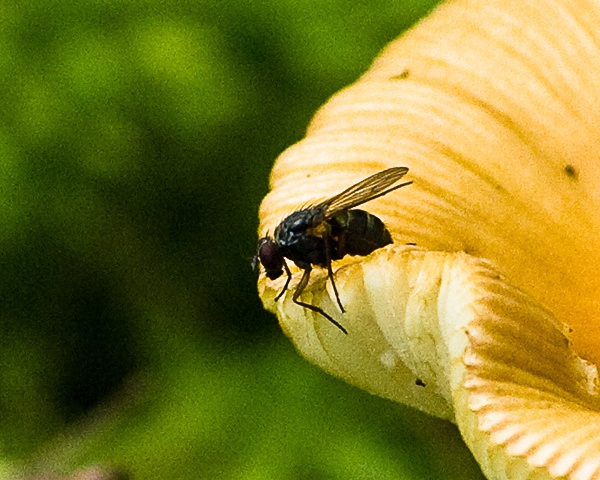 This week’s oldie-but-goodie comes from August 2007, back when I was first learning to light with external flashes. Jeff and I were on a photo walk and came across this piece of public art outside of the Waterloo Library.

Being a bit foggy out I thought that backlighting the art would give a cool effect, with the metal plate becoming a dark aperture and the figure inside being lit from behind. I set a Vivitar 285HV behind the piece and triggered it with a cheapo Ebay trigger. The moisture in the air caught some of the light and gave a cool starry look.

Lighting a large scene with just one flash is something I’d wanted to try for a while and finally got around to it with this shot in today’s Oldie-but-Goodie.

This photo is a composite of six shots, stitched together in Photoshop CS5. In each, I lit a different part of the building using a single SB-900 flash with the standard diffuser cap. I fired the flash using the test button and in most of the shots I fired it multiple times. The camera (Nikon D300s wtih Tokina 11-16mm) was set to manual exposure (f/8 8s ISO 100) and manual focus and set on a tripod in the parking lot. The long exposure allowed the camera to capture the ambient light but also gave me the time for the flash fires.

Here are the shots that went into the composite. In the first four I lit both the concrete and brick walls.

In the next two I tried to light the smoke stack by zooming the flash in to 200mm. The flash lost a lot of power at that distance and even with multiple fires it was difficult to light the stack. 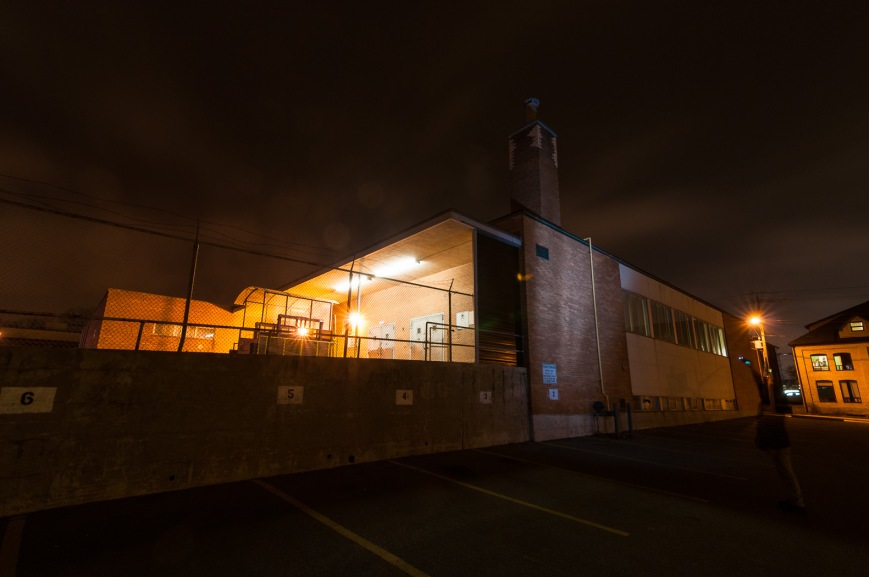 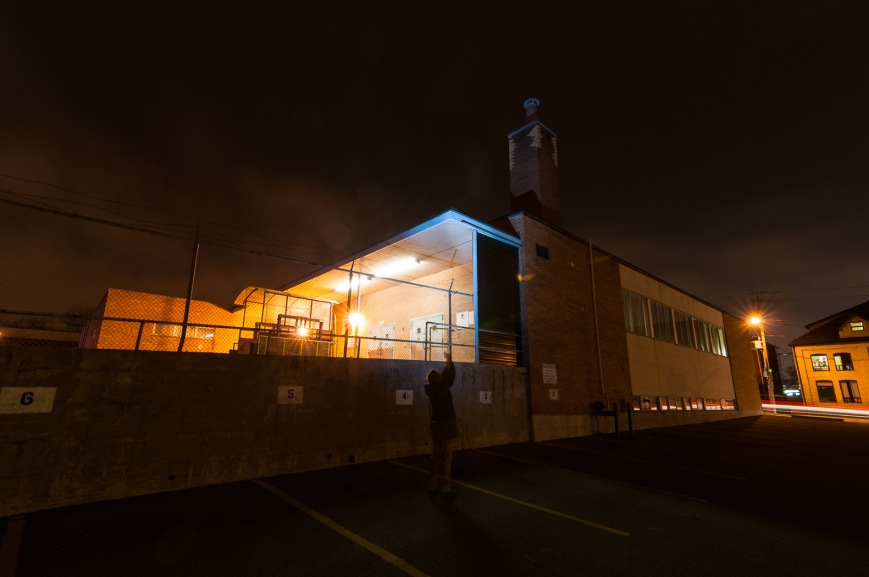 At this point the images look like a mess with many points of light and many Owens. However, by choosing which part of each image I wanted to come through using layer masks I could clean this up considerably. Below I show a capture from Photoshop with each of the images and their corresponding layer mask. Notice that for the most part only a small area (the white region of the layer mask) is used in the composite.

In the end I did have to remove a few stray flash bursts and Owen limbs here and there using the healing brush and clone tools. Finally, with a curves adjustment to brighten the lower mid-tones, I ended up with this! 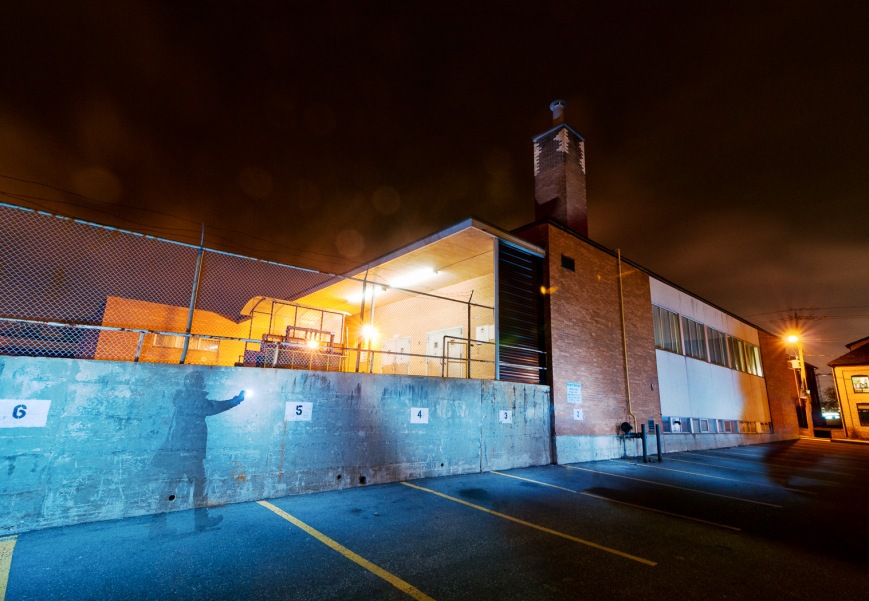 As this was my first ‘light painted’ composite, I did learn a few lessons. Most importantly, it was difficult in a few instances to remove my ghost from the image. Next time around I would use brighter flashes and stand further away from the subject to not catch as much of the reflection. Distance would also help broaden the spot as it falls on the surface. Overall though, I was happy with this first attempt!

This week’s oldie-but-goodie comes from February 2008, in the middle of my year long Photo-a-Day challenge. I challenged myself to produce a decent photo every single day for an entire year and, for the most part, pulled it off.

The images aren’t on my Flickr page (although my 2/3 of a year follow attempt is). No, they’re on my old photo site on Pbase. I haven’t paid my subscription to Pbase in many years, so it’s a miracle that I still even have a page up. Check it out here!

The photo is of friends making masks in a basement bathroom. When I saw what was going on I quickly grabbed my flash and mounted to the curtain rod in the shower with a super clamp. The flash was triggered with crappy old ebay triggers.

On a few occasions I’ve had the opportunity to shoot the fake prom event at the Starlight in Waterloo… essentially a big night club party where everybody dresses up. My part has most often been by setting up a ‘photo booth’ where individuals, couple or groups can pose together and be as goofy or sexy as they like. Today’s oldie-but-goodie comes from my favourite of these proms, back in 2010. The theme was Horror, if I remember correctly. I’m a big fan of this photo of Celeigh, both for the lighting and for the pose.

For the photo booth I set up three lights. For the main light I used an Alien Bee B800 with brolly box (an octagonal softbox that opens and mounts like a shoot-through umbrella). The light was on a stand, cinched tightly to a post. For rim lights I clamped a Vivitar 285HV about 15′ away on each side, as close to the back wall as possible. The 285HV on the left was gelled with blue and the one on the right was gelled deep red. I triggered the three lights with Cybersyncs.

This week’s Oldie-but-Goodie comes from a trip Mitzy and I took to Washington DC last summer. On a blazing hot day, we took refuge in the Lincoln Memorial where I took this photo with the D300s and Tokina 11-16mm f/2.8.

I used a few photographic tricks to make this image. First was my choice of perspective. I used the Tokina 11-16mm at 11mm to capture the vast interior. The room was also full of people but Mitzy pointed out this excellent vantage point that was completely tourist free! Compare above to the image below. It’s hard to believe that they were taken just a few minutes apart:

To capture the full tonal range of the space I used an HDR technique. I took five images, each separated by 1EV and combined the -2, 0 and +2EV into an HDR image in Photoshop’s HDR Pro tool. Here are the three images that fully encompass the darkest and brightest tones. 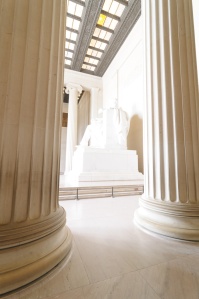 Once the HDR was created I tweaked the brightness/contrast and fixed the vertical perspective in Lightroom.

And that’s it! A unique perspective of a familiar landmark, captured with full tonal range.

Today’s Oldie-but-Goodie is a fun little ‘portrait’ of an action figure. After reading about some cool lighting setups for defining muscle I wanted to try it out on a real live muscular person. Unfortunately, I am not this person…

The Flash (fittingly) would have to stand in for me. This shot is actually one of the more complicated lighting setups that I’ve done. It uses four flashes in total and each of them is modified. The principle of the lighting is to use a softbox in a ‘tabletop’ position, meaning that it sits directly above the subject pointing straight down. The direction of light causes the muscles to cast strong shadows, adding definition. With just this one light, the shadows are quite strong. Rim lighting or fill lighting can lift the shadows.

For this shot I used the lighting diagram below:

A Lumiquest Softbox LTZ on SB-900 sits directly above the subject (even though in the diagram it’s placed slightly in front) and points down. For rim lighting I use two more strobes. On the right is a SB-700 with a grid spot. On the left is a Metz 48 AF-1 with a grid spot.

For the backround I used a fourth light, an Alienbees B800 with 22″ beauty dish with a diffuser sock placed over it. I’ve had a lot of fun placing this light modifier directly into photos as a creative element in the past.

The SB-900 used for tabletop lighting has a Full CTO gel on it. The Metz 48 AF-1 on the left is gelled with a light blue. In hindsight, the blue was probably unnecessary as it doesn’t look much different from the non-gelled flash (see the highlights on his waist at left and right).

This week’s oldie-but-goodie is a simple, straightforward and totally spontaneous photo taken on a walk to the grocery store. It’s also a perfect example of why I try to take my camera everywhere with me.

Street photography is an art form that I (and many others) romanticize. From Henri Cartier-Bresson (the father of photojournalism, according to Wikipedia) to the recently discovered of Vivian Maier (who I recommend every green, experienced or even jaded photographer study) to the modern hipster photographer, I have this romantic vision of a confident, passionate and skilled artist. They turn everyday life into images that I can stare into for hours.

Street photography is an art form that I try to succeed at but rarely do. I’ve tried to “shoot from the hip”, by setting the camera to a small aperture and wide field of view and causally holding it down chest level. Usually what I get are out of focus images of people’s shoulders or store fronts. I’ve tried standing way back with a long telephoto and taking sniper shots, often getting the ‘why is that guy with the massive lens taking my picture?’ look.

Generally, the best images have come from confidently and casually approaching an interesting scene. I make myself and the camera visible. I smile. I say thanks. Hiding the camera or hiding myself just doesn’t work as well. This method helped me get some of my favourite street shots during last year’s trip to China.

So… the photo. As I said, I was walking to the grocery store with the D300s and Nikon AF-S 35mm f/1.8 DX. This lens has a near-normal field of view and is small, light and unassuming. As I crossed the entrance to the alley the man rode past me on his bike. I turned, followed and took 3-5 shots. I didn’t have to edit the shot much, just a black and white conversion and some contrast.

My good friend Portt was asked to photograph a fully-restored Jaguar E-Type for an Ebay sale. Being the “guy with the lights” and also a car nut he asked me if I wanted to come along and meet the fantastically beautiful work of art, perfection on wheels. “Yes”, I said.  I was fully expecting to park the car under a tree, near a fence, with a picturesque farm scene behind. Or on a twisty road, tunneled by tall trees. But in reality it was sitting in a dark and dusty barn basement under a tarp, boxed in by a bunch of other stored cars.

We set up the lights as best we could to not create too many hot spots and blown-out specular reflections. The key was to have the light sources as large and diffuse as possible. Since I don’t own and giant car-length softboxes or strip lights, instead I brought my umbrellas and brolly-box as close to the car as I could. For lights I used my two Alien Bees B800s and a Vivitar 285HV, all remote triggered by Paul C Buff Cybersyncs. The camera was a D300s with AF-S 17-55mm f/2.8 @ 17mm f/6.3 1/60s ISO 200.